Behind the Scenes: Getting the Cover Shot

A lot of prep work goes in to multi-model shoots as I have mentioned, and my Independence Day shibari shoot was no exception. I had to prep three different colors of rope, tie up each model individually while making sure all three line up (knot-wise, as best I could) and then shoot the entire series while on a very tight time schedule because we were prepping for the PRIDE shoot outdoors, which had to be shot in a *very* specific time window.  As a refresher, here is the completed preview image for the shoot, which debuts the first week of July over on my deviantART account: 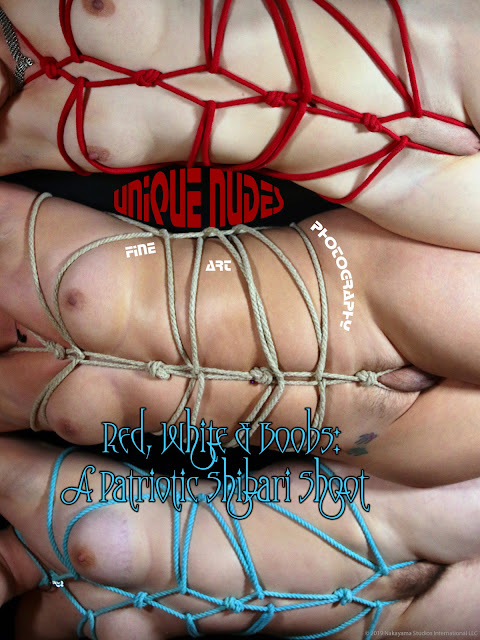 In order to get this shot (which is rotated 180° from how I shot it) I had to use a step stool and some tricky useage of my LED "hot" light panels to avoid major shadowing, as seen below: 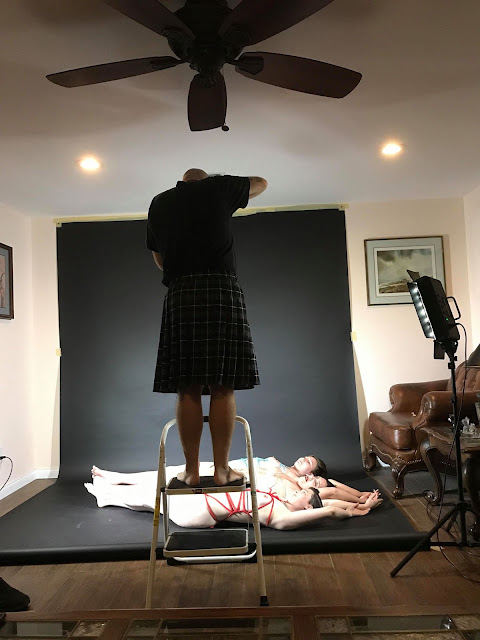 As you can see, I actually shot this in the Old West/Gentleman's Lounge set room (Old studio B) as Studio A was being used at the moment.  I don't think we did too bad considering the lack of space.
The model in blue rope, Kore, had never before modeled nude, so this was a first for her. Fortuneatly, she took direction well and was easy to work with.  Actually, the hardest thing with this shoot was getting all three ropes to match up, as each one was a different material.  The red rope was diamond-braided "silk" style kinbaku rope, the white was natural hemp and the blue was dyed cotton.  Although all three models had been at least casually tied before, it was also still a pretty new experience for all of them.  I'm not entirely sure how many processed images I'll end up with (there is only so much you can do with a single color backdrop and no props) but it should be available for download by the end of the week.
Cheers!
at June 30, 2019

Email ThisBlogThis!Share to TwitterShare to FacebookShare to Pinterest
Labels: behind the scenes, shibari, Shoot Preview