Portrait of the Artist as a Model, Part I 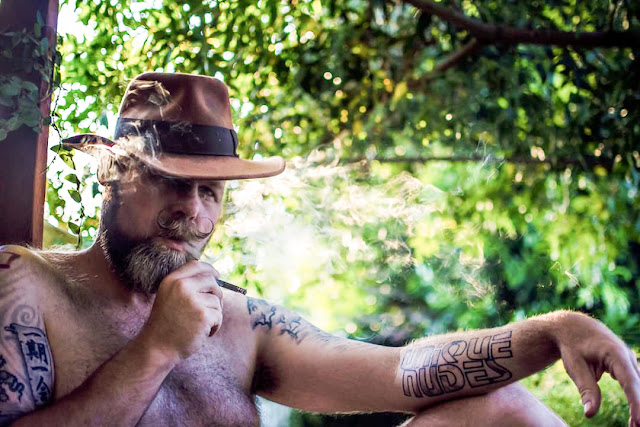 I've been a nude photographer for over 22 years now, but I remember what it was like when I first started out. Even apprenticing for Michael Nakayama, it was tough to get models. Women always assumed it was a ploy to get them to sleep with me, and male models assumed I was gay.
Recently, a friend of mine who is an aspiring photographer posted he was looking for male nude models. Now this friend is gay, and he lamented the same problems I had... that most guys thought he was looking for a hook up. I myself am very straight, and having not been in front of the camera since I've lost all this weight, I decided to both help him out AND enjoy my new, fitter body.  I'm far from perfect, but like me my friend is interested in photographing all kinds of bodies, not just the perfect ones.
I invited him to my studio so he'd have some sets to shoot on, and we proceeded to do a few different shoots. The photo at the top of the page is pretty much straight out of his camera, with some light editing by me. The rest of the images below were taken on a cell phone by my girlfriend, who was present at the shoot to help me with posing, as it's been at least 6 or 7 years since I last modeled, and she does regularly.  We shot in the tea garden, the docks and the TARDIS sets, and after the sun went down he shot some long exposure stuff.  I'm pretty excited to see how they turn out, and I will be posting some of his finished images of me in a later blog when they are done.
Anyhow, hope you guys don't mind these; it was certainly a different experience working on the other side of the camera, and I'm happy with the results so far.

To see all of my favorites from this shoot, continue on to Part II here.

Email ThisBlogThis!Share to TwitterShare to FacebookShare to Pinterest
Labels: behind the scenes, male nude